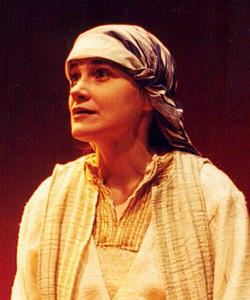 Here’s what people are saying about Acacia Touring:

Beginning as a touring company, Acacia performed at schools and churches throughout the Greater Milwaukee area. The company continues to tour today and has performed for thousands of people in countless schools, retirement communities and churches of every denomination. For information about bringing an Acacia touring show to your organization, call (414) 744-5995 or email office@acaciatheatre.com.

A hit in Acacia’s 2014-15 season, this play has “humor, pathos and amazing grace” (Journal Sentinel). The eternal story of Jesus as told through eyes of two fishers-of-men, Peter and Andrew, an odd pair who hilariously misunderstand their Lord as they earnestly attempt to follow his call. (75 minutes)

Handmaid of the Lord

Acacia’s most popular touring show, this original one-woman show recounts the life of Jesus through the eyes of his mother, Mary. Shortened versions available for Christmas and Easter. (30 or 60 minutes)

Meet the wise-cracking Noah, his wife and some animals as they come to understand the covenant of the rainbow. (20 minutes)

Everyone has heard of the whale, but how did Jonah get thrown into the sea to begin with? This story stresses God’s forgiveness to those who repent of their sins. (20 minutes)

A Christmas of Many Parts

A touring theatre troupe, performing a traditional Christmas Nativity play, realizes that 8 of their 12 actors are missing. But the show must go on, with the troupe and a drafted usher all playing “many parts” to hysterical results. (20 minutes)

Can the true meaning of the Incarnation be discovered when four people are trapped in an elevator on Christmas Eve? (20 minutes)

A beautiful trio of legends and stories that touch the very heart of Christmas. (20 minutes)

The Least of These: A Shepherd’s Tale (NEW)

A down home sheep herder shares the story of what happened to him one special night. (15 minutes)

See also Handmaid of the Lord.

A heartwarming retelling of the events of Jesus’ last week in Jerusalem, as told through the eyes of a merchant, the soldiers, Judas and two bumbling con artists. (45 minutes)

See also Handmaid of the Lord.

Shows for Any Occasion

A contemporary imagining of the parable of the woman at the well. (15 minutes)

The Tale of the Three Trees

Three trees take part in the life and death of Jesus. Also suitable for Christmas and Easter. (10 minutes)

A Day at the Bus Stop

A person waiting at a bus stop is challenged by a stranger who claims to be Jesus. (10 minutes)

If God talked out loud what would He tell you? (10 minutes)

The Parable of the Lighthouse

A lighthouse becomes so successful that it discontinues life saving operations. (10 minutes)

In the dark of doubt, a woman finds joy in the Lord of love. Inspired by the hymn “Joyful, Joyful, We Adore Thee.” (15 minutes)

A poetry reading consisting of varied poets from classical to contemporary, all reflecting and inspiring hope. (Customizable length)

Shorter shows may be combined. All Biblical Characters shows are also suitable for any occasion.